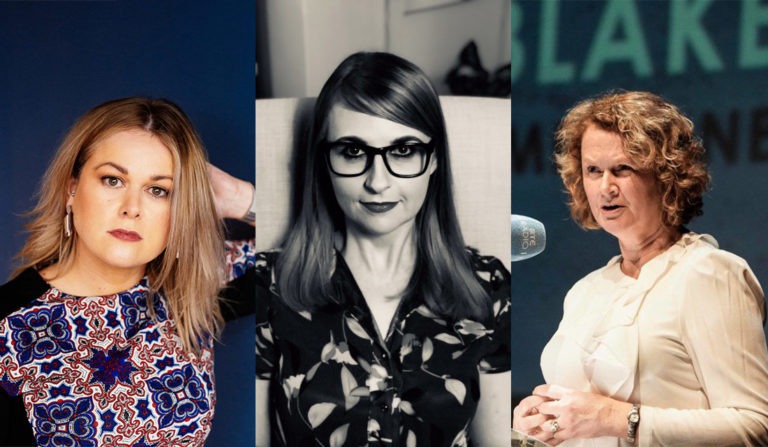 Join two of Ireland’s most talked about new novelists, Elaine Feeney and Helen Cullen, in a live zoom conversation and reading, hosted by festival literary curator and much loved poet, Densie Blake.

Elaine Feeney is an award-winning writer from Galway. She has published three collections of poetry, including The Radio was Gospel and Rise. Her collaboration with the Liz Roche Dance Company, Wrongheaded, toured internationally including a successful run at the Edinburgh Festival Fringe. Her debut novel, As You Were, was published this summer by Harvill Secker (Penguin Random House) to much critical acclaim. It has been included by The Guardian newspaper on its list of Ten Best Debut Novelists for 2020.

Helen Cullen is an Irish writer living in London. Her debut novel, The Lost Letters of William Woolf, won her a Best Newcomer nomination at the 2018 Irish Book Awards. Helen’s second novel, The Truth Must Dazzle Gradually, was published this summer by Penguin Random House in Ireland, the UK and America. Described as ‘a compassionate portrayal of grief’ by the Irish Times, the novel has achieved considerable critical acclaim. Graham Norton tweeted, ‘a beautiful bittersweet story of love, loss and families, all set in the most irresistible of locations. Tears were shed!’.

Denise Blake has curated the festival’s literary programme for many years, where she has been instrumental in attracting the cream of established and emerging writers to read in Donegal. A highly regarded poet in her own right, she has published three collections to-date – Take a Deep Breath, How To Sing Without Getting Dizzy (both Summer Palace Press) and Invocation (Revival Press). Denise is a regular contributor to RTÉ Radio 1’s popular Sunday Miscellany, appearing in its 50th. Anniversary celebration at the Project Arts Centre and in the subsequent, best selling Miscellany 50 anthology publication.