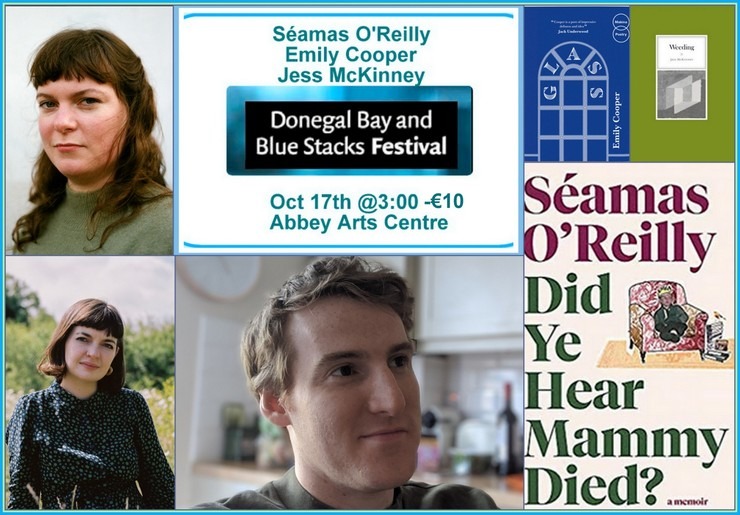 Derry-born, London based Séamus O’Reilly’s memoir, Did Ye Hear Mammy Died?, was published earlier this summer. It  currently sits at the top of most best-selling Irish book lists. He writes a hugely popular column for the Guardian Weekend magazine, on the highs and the pitfalls of parenting his playschool going son. Séamus also writes about media and politics for the Irish Times, the Observer and the New Statesman.

Jess McKinney
Jess Mc Kinney is a poet from Inishowen, Donegal. She completed her MA in Poetry at Queen’s University Belfast, where she was awarded the Irish Chair of Poetry Student Award 2020. = Her poetry has appeared in The Moth, The Stinging Fly, Banshee, Channel Magazine and The Open Ear, with upcoming work in The Poetry Jukebox and the New Island anthology, The New Frontier: Writing from the Irish Border. Her debut pamphlet, Weeding, is forthcoming with Hazel Press, supported by an Artist Bursary from the Donegal County Council.

Emily Cooper is a Ramelton-based writer and poet, whose work has been published in The Stinging Fly, Banshee and Poetry Ireland Review among others. She was a 2019 recipient of the Next Generation Award from the Arts Council of Ireland and has completed residencies for the Irish Writers Centre, Centre Culturel Irlandais Paris and the Regional Cultural Centre, Letterkenny. Her poetry debut, Glass, was published this summer by Makina Books.

Denise Blake has curated the festival’s literary programme for many years, where she has been instrumental in attracting the cream of established and emerging writers to read in Donegal. A highly regarded poet in her own right, she has published three collections to-date – Take a Deep Breath, How To Sing Without Getting Dizzy (both Summer Palace Press) and Invocation (Revival Press).  Denise is a regular contributor to RTÉ Radio 1’s popular Sunday Miscellany programme.